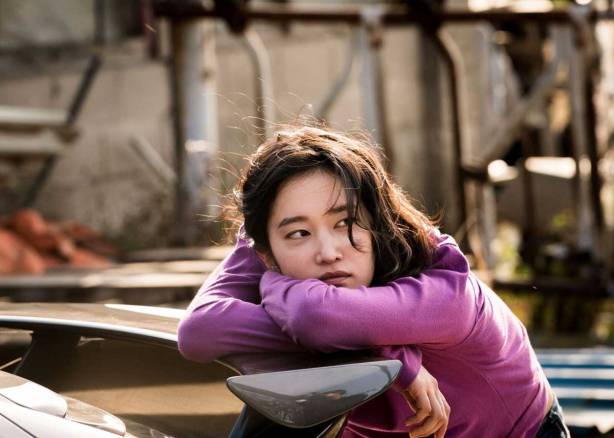 My daughter is teaching herself Korean and before I left for MIFF, she taught me how to say, “I’m tired. However, I want to watch a movie” in Korean. I thought of her when I saw Burning in the sumptuous Versailles that is the Regent Theatre.

Helped, no doubt, by the comfy seats and a chocolate bar found in the bottom of my bag, 2 1/2 hours in the bleak and beautiful world of South Korean disaffected youth flew by.

Jong-su ( Yoo Ah-in) bumps into school friend Hae-mi (Jeon Jong-seo) as she dances outside of a discount store, a K-pop enticement for shoppers. It seems he doesn’t really remember her but they go for a drink and a tentative friendship is kindled. Hae-mi is impulsive and has ambitions to achieve more from her life. Jong-su seems equal parts fascinated and bewildered by her, tentative about showing his affection but quick to agree to feed her cat while she is holidaying in Africa. On her return, he is dismayed to meet Ben (Yeun Sang-yeop) who Hae-mi has befriended on her travels and he is easily cowed by Ben’s wealth and nonchalant ease.

Evolving quietly with beautiful cinematography and an evocation of young people adrift in an isolating metropolis, the tension of the narrative very, very slowly increases. There are subtle twists and turns that keep you off-balance, never completely sure of each character’s moral compass or real motivations.

I have a theory that if there is a television on, playing the news, in the background of a movie, it’s the key theme of the story. In Burning, it’s about youth discontent and unemployment with a few shots of Donald Trump thrown in. The three main characters are representative, perhaps, of different types of contemporary youth, each vulnerable in different ways and caught within a life they can’t escape. Jong-su’s comments about South Korea having “too many Gatsbys” says as much about his character and his resentments and ambitions as it does about Ben.

The character of Hae-mi is pivotal, even though she does not, in the end, have that much screen time. A scene where she dances to Miles Davis is hard to forget. It is Jong-su, though, who the story is about. His dilettante life and his relationship with his father are undercurrents that have much to do with the ending, I suspect.

For most of the film I thought I knew what was happening, who the culprit was. The last scenes though, threw a lot of that out the window and I was left wondering what I had been convinced wasn’t not there.