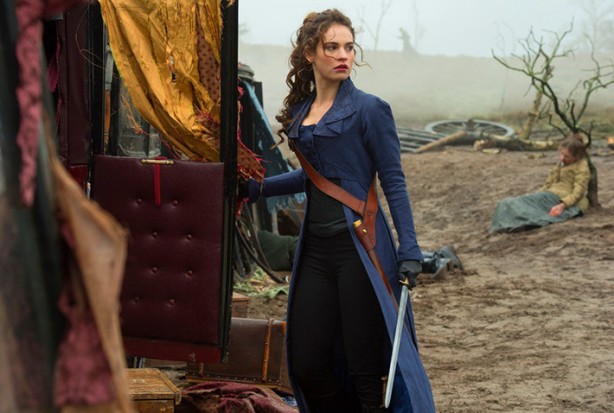 “It is a truth universally acknowledged that a zombie in possession of brains must be in want of more brains.” And so begins Pride and Prejudice and Zombies. I had low hopes for this film as it came and went at the cinema within a few weeks, never a good sign. It combines two excellent genres though – Austen and horror – and was much, much better than I’d hoped. Regardless of it’s occasional flaws in logic and pacing, Pride and Prejudice and Zombies reimagines a classic where women are socially powerless and makes them warriors.

The zombie story is woven cleverly through the well-known story of the five unmarried Bennett daughters, destined to be cast adrift when their father dies as his estate is entailed to a male heir, their nearest cousin Parson Collins (Matt Smith). We are given a swift overview of the history to date and how zombies have overtaken London, kept confined behind a wall and a moat. Fitzwilliam Darcy is a renowned fighter as everyone of good breeding undergoes training before adulthood – to Japan for the wealthy and to China for everyone else. The Bennett girls are “servants of His Majesty, protectors of Hertfordshire, beholders of the secrets of Shaolin, and brides of death”, slipping knives into their stockings and proficient in all weapons and hand-to-hand combat. They still must be married but Elizabeth vows, “I will never relinquish my sword for a ring.”

And so goes a rollercoaster ride through well-known scenes, such as the Netherfield Ball, Jane’s trek across country (her cold is a suspected zombie bite), Darcy and Lizzie’s love-hate relationship and Wickham’s nefarious deeds. The focus, though, and the thread of the plot, is about holding back the zombie hordes. The prejudice that must be resolved is the belief that zombies are less than human and there is some over-complicated exposition to help us understand, not very successfully.

This takes up space in the film so that some much-loved characters and story lines become peripheral – Jane and Bingley, Lydia, Kitty and Mary and, very sadly, Lady Catherine de Bourgh. I say sadly because her characterisation is brilliant. She is played with icy resolve by Lena Headey (Cersei Lannister in Game of Thrones), complete with eye patch and a reputation as the greatest zombie killer. It feels like she has a whole story line that is never explored. What is under the patch? Why is her daughter non-verbal? Is she a villain or a hero? One of my favourite lines is from her, to Liz, “I do not know which I admire more. Your skill as a warrior or your resolve as a woman.”

The casting of the other characters is fine. Lily James as Elizabeth is way too pretty – she makes Jane look wan – but she is feisty and totally believable as a warrior and the object of Darcy’s admiration. Darcy is also serviceable although I kept hearing Ian Curtis (Control) in Sam Riley’s delivery. Sally Phillips was born to be Mrs Bennett and Jack Huston makes a delightfully wicked Wickham. And Matt Smith is at his geeky best as Parson Collins (with much too subtle inferences about his sexuality).

Don’t expect too much from this film, just go along for the ride and bring your daughters.