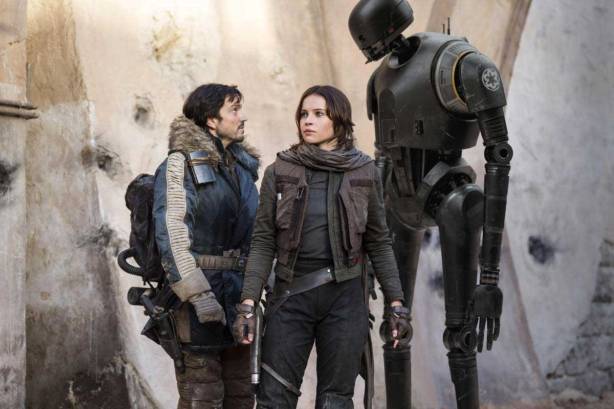 The best way to see a Star wars film is at iMax in 3D (thanks Vaughan for the tip) with your three daughters, some popcorn and a frozen drink. Why? Because it gives a movie reliant on action and special effects its best chance and it will be an enjoyable event regardless. Rogue One has something going for it; being only a fragment of the original Star Wars story (what happened just before Episode IV: A New Hope) it isn’t weighed down by the original Star Wars characters or the unquestioning reverence for Star Wars canon that The Force Awakens seems to struggle under.

Jyn Urso (Felicity Jones) is the daughter of Galen Urso (Mads Mikkelsen), the designer of the Death Star. She has gone into hiding as he is forced to continue the design of this world-destroying weapon against his will. In this we can see him as an Oppenheimer, instrumental in the creation of destruction but horrified at what he has done. Via a circuitous path with some cool fighting and visual references to the original Star Wars films to satisfy fans, Jyn gangs up with a raggle-taggle band of rebels to steal the plans to the Death Star from the Empire’s databank on Scarif.

I wasn’t totally convinced by Jones as Jyn or Diego Luna as her sidekick Cassian. They work hard at it but there is no real development of the characters or understanding of how their lives have shaped them. Parts of the film are cartoonish in their realisation and dialogue, which seems at odds with the overall seriousness of the story. Poor Forest Whitaker draws the short straw and plays a character, Saw Gerrera (Che Guevera?), with some of the worst dialogue and characterisation, “Save the rebellion! Save the dream!”

Darth Vader gets a look in and maintains his reputation as one of the most effective cinematic villains.  There are some great secondary characters who seem to capture the light-hearted humour of episodes 4 to 6 without the Disney cuteness of episodes 1 to 3 and 7. Donnie Yen and Wen Jiang as Chirrut and Baze are as cool and insouciant as Han Solo and Alan Tudyk as the sarcastic K-2SO is the best android since paranoid Marvin. The action and special effects are as impressive as you’d expect and I really appreciated the ending and it’s emotional impact.

There are, though, some big plot holes, convenient inconsistencies and lack of logic. Much CGI effort is put into making Governor Tarkin look like Peter Cushing (he died in 1994), perhaps to appease all those fans who would notice. I was disappointed once again by the almost complete lack of female characters, even as extras. We have Jyn but that apparently is our quota. There is a little more cultural diversity in some of the secondary characters but not overall.

Part the problem that the Star Wars franchise has is that nothing will ever be as good as the original three films, not because those films are perfect but because our nostalgia for that moment in our lives when we rode in hyperspace with Han, Leia and Luke can never be bettered.