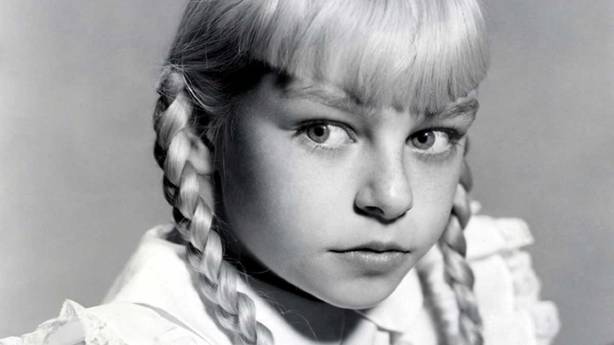 “What will you give me for a basket of kisses? A basket of kisses? Why I’ll give you a basket of hugs.” A discussion with two good friends lead to an afternoon where each brought along their favourite ‘bad movie’. Bad movies are the ones you love to watch, even though you know they fail to meet many standards of cinematic quality. I had never heard of the 1956 The Bad Seed; it is based on a successful Broadway play and from where Nick Cave and the Bad Seeds took its name. What a melodramatic gem it is; predating Hitchcock’s Psycho in its Freudian exploration of horror that comes from within a family.

Christine Penmark (Nancy Kelly) struggles with her husband’s forced absences due to his military job. She is left at home with her seemingly perfect eight year old, Rhoda (Patty McCormack), and friendly yet intrusive landlady, Monica (Evelyn Varden). Rhoda insists on wearing elaborate and old-fashioned starched dresses, immaculate braids in her white-blonde hair and is a model of politeness. Visitors, including Monica, see her as a perfect child and can’t help but heap praise and gifts upon her.

To her mother, though, her determination, unbridled ambition and lack of empathy for others begins to show. The pivotal moment comes when Rhoda loses a ‘penmanship award’ to rival and fellow student, Claude Daigle. Incensed and adamant that she deserved to win, she seems unmoved when he drowns at a school picnic. The medal that was proudly pinned to his shirt is not found on his body and the suspicions of their teacher and Claude’s mother turn toward Rhoda.

Monica is a devotee of Freud and so there is lighthearted discussion about whether nature or nurture creates sociopathic killers. The prevailing belief is that it is only nurture, therefore a child from ‘nice family surroundings and advantages’ without ‘brutish expressions on their face’ couldn’t possibly be bad. Christine’s increasing hysteria revolves around a fear that she was adopted – perhaps the bad traits that Rhoda is showing secretly come from her. And Rhoda is unequivocally a ‘bad seed’.

What makes this movie so bad is its stilted melodrama. Its origins as a play are apparent with key characters played in an exaggerated manner by those who gained such acclaim with it on Broadway. Nancy Kelly is the most over the top, flinging herself around, gesticulating and wringing her hands at every opportunity. Compared to her, Monica is a stately ship calmly navigating stormy seas and oblivious to hidden dangers.

There is another ‘bad seed’ in the ensemble; creepy gardener and handyman Leroy (Henry Jones) who sees Rhoda for who she is, recognising their commonality of meanness. The scenes with the two of them are deliciously histrionic and we delight in seeing Rhoda’s true colours. Rhoda is sensational; with her perfect appearance and saccharine demeanour it is not hard to believe her heartlessness and how dangerous she is. She has some of the best lines, ones that you’ll remember for a while. Sometimes I found myself barracking for her over the inept martyrdom of her mother.

If you do get to see it, stay right until the end of the credits. The Motion Picture Production Code meant the ending of the film had to be changed from the original, much darker play. The theatrical curtain call and the very last scene are a nod to the play where they were included to pacify distraught audiences.