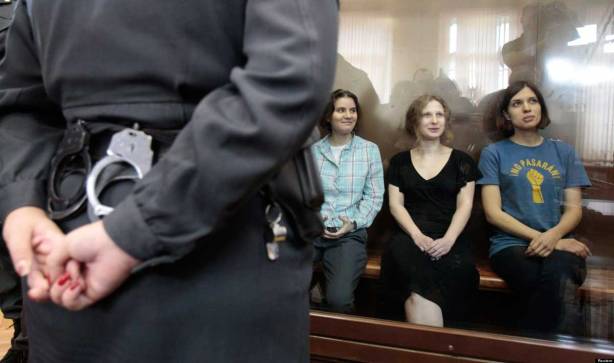 Pussy Riot are, kind of, a female punk band who would stage meticulously planned actions garbed in brightly coloured balaclavas. They would swiftly occupy a rudimentary stage – the roof of a trolley car, a wall in Red Square, the top of a building opposite a prison – and perform their socially vociferous songs, such as “Kill the Sexist’ or “Mother of God, Drive Putin Away.”. They hit world headlines when a 40 second action in a church provoked the ire of the two most powerful organisations in Russia, the government and the church, and three members were arrested. Their trial for a trumped up charge of hurting the feelings of religious believers saw them, incredibly, sentenced to two years jail, after being held without bail for six months.

When I saw that Pussy Riot were coming to Dark Mofo*, I booked it straight away without reading what the performance actually was. That’s what I like about Mofo; the program gives so little information that you make choices on instinct rather than a stultifying sense of your own taste. What I thought would be a musical performance by the Russian activists turned out to be a screening of a documentary about them, Act and Punishment, and a Q&A with one member, Maria ‘Masha’ Alyokhina (second from left, above). And now I understand why a musical performance by them would be unlikely.

There were many things I didn’t know about Pussy Riot: punk music is just one art form they use to communicate their message; the membership waxes and wanes due to regular detention deterring all but the most committed; and the action they were arrested for was a failed attempt to perform in Moscow’s Cathedral of Christ the Saviour after the head of the church asked his followers to vote for Putin. They were only arrested after someone posted footage online.

In Act and Punishment, three core members, Masha, Nadya Tolokonnikova and Katia Samutsevich, along with several other balaclava-masked members, talk engagingly about the formation of the group after they grew tired of the men dominating the actions and the leadership of the political street art Voina collective. The documentary is at first a little frenetic with a quick succession of talking heads making it hard to determine personalities whilst frantically reading subtitles but it settles into a more leisurely pace and takes its time to build a picture of the group and the impetus behind their actions.

The women speak well and there is plenty of rough footage of their protests and coverage of their trial. What becomes clear is how ludicrous the charges and trial seemed to them. When they are given a chance to speak in court they seem incredulous, understandably so considering the spurious charge of ‘hooliganism inspired by religious hatred’ for 40 seconds of shouting. One of the three, Katia, was given a suspended sentence two months later and Nadya and Masha served 15 months in a prison camp in the Urals 3,500km from home.

Masha, with a calmness and wisdom beyond her 29 years, spoke at the Q and A session with the manager of Pussy Riot, Alexander Cheparukhim, and Sasha Bogino who works with Masha and Nadya in the media company, MediaZona, they have formed since their release. Their focus now is on the human rights of prisoners in the justice system and they continue to campaign and agitate. Cheparukhim highlighted the changes over the past seven years in Russia, with a street art action in 2010 (where a huge penis was drawn on a bridge that lifted up to allow boats to pass) receiving a government art award. With the election of Putin’s government, everything has changed.

What has stayed with me is Masha’s parting words that “everyone can be Pussy Riot.” Pussy Riot is not, as I thought, a punk band who might play a gig at a Tasmanian festival, they are an ongoing symbol of female protest against inequity and corruption.

*Dark Mofo is a festival of darkness in Hobart, Tasmania, created by iconoclast David Walsh, the man behind the superb Museum of Old and New Art (MONA). Running in the weeks leading up to the winter solstice, it rather brilliantly brings thousands of people to the coldest place in Australia at its coldest time.

Have you seen this film? Do you have any thoughts about Pussy Riot? Let me know in the comments below.