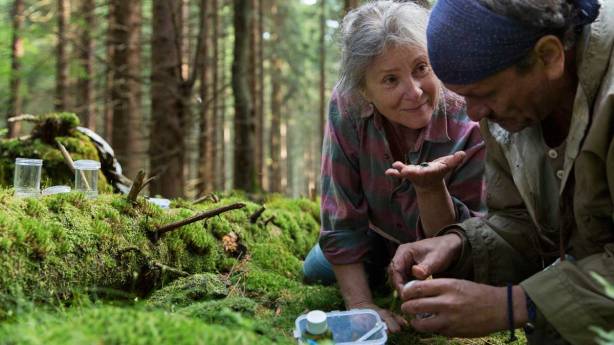 This oddball Polish genre non-conformist feature by Agnieszka Holland had lots to like about it but ultimately felt like less than the sum of its parts.

Set in a rural Poland where hunting is an accepted and manly, quasi-religious and nationalistic pursuit, animal lover Janine Duszejko (Agnieszka Mandat-Grabka), who prefers to be called by her last name, is a misfit. When her two beloved dogs disappear, she co-opts the village children to search the forest with her at night, earning the ire of their parents and the head teacher of the school where she teaches. When a local hunter is found dead, she irritates and confounds the police investigation by railing at their unwillingness to respond to her prior accusations of his cruelty to animals and illegal poaching.

All of the village men of authority – priest, police chief, mayor – make fun of her and dismiss her impassioned pleas for them to respect animals as living beings equal to people. She draws friends to her; the odd and the broken such as ‘Good News’ (Patrycja Volny), a young girl being abused by her employer, Dyzio (Jakub Gierszal), a computer geek who works for the police and hides his epilepsy, and Matoga (Wiktor Zborowski) who lives alone and has a hidden past. As more deaths occur Duszejko is sure that the animals are fighting back.

Mandat-Grabka carries the key role well, engaging your sympathy and staying likeable even when she loses control. Her gang of misfits are not so well developed as characters but they are whimsically amusing and help propel the story along. The film hovers between several genres – a murder mystery, a satire, an environmental treatise and a little bit of magical realism – never quite finding its footing with any and feeling slightly awkward in its indecision. Ultimately I felt charmed but a bit underwhelmed.