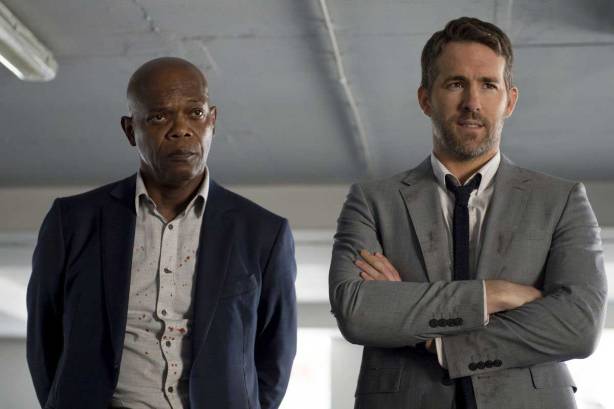 Faced with a choice of only three films that I could see and none of them ones that I would particularly choose (the kind of first world problem you have when your car is being serviced in a country town), I took the advice of the guy selling tickets at the cinema. He warned me off American Made (“It’s crap) and Dunkirk (“It’s boring) so The Hitman’s Bodyguard won the prize. Skimming reviews on IMDb, I expected an illogical but diverting shallow crime caper with two charismatic male leads and a few token women as love interests. And that’s exactly what I got.

Ryan Reynolds is Michael Bryce, a “Triple-A listed elite executive protection agent” whose life falls apart when his client is killed. Samuel L Jackson is Darius Kincaid, a hitman who has agreed to testify against Belarus despot Ladislav Dukhovich (Gary Oldman) in return for the release of his wife Sonia (Salma Hayek) from a Dutch prison. When Interpol agents tasked with getting Kincaid to the Hague fail, agent Amelia Roussel (Elodie Yung) ropes in ex-boyfriend Bryce to get him there.

We have seen this kind of story many times before: Kincaid and Bryce are mismatched partners who represent the old and the new, forced to accept each other and in the process learning about themselves and the meaning of life. All of the characters are two-dimensional, including the leads, but offbeat humour interspersed with satisfyingly unrealistic action kept me mostly engaged.

A lot relies on the likability of Reynolds and Jackson and, happily, they tread the right side of smarmy arrogance. Sonia and Amelia as the love interests are a little different than the norm; both are confident and physically strong and although technically there is a little bit of saving going on, they both seem the equals of their partners.

You really have to suspend disbelief to enjoy this movie and there were a few moments where I faltered. Interpol as gun toting heavies? Sonia’s immaculate sexy-messy hair and full make up in prison? A motorbike keeping up with a speedboat in Amsterdam? Every fight scene where 50,000 bullets miss the heroes but a single bullet from a handgun downs a baddy every time? Yes, it’s that kind of movie, but it has a feeling of being so overt that you can almost forgive it for being deliberate parody. Almost.

Movies this shallow give you plenty of time to think and so I pondered the moral subtext we were being sold. There is definitely an endorsement of murder for the ‘right’ reasons. Kincaid is portrayed as deeply moral despite his “more than 250 murders” as he is killing the ‘bad’ guys. Bryce, whose job as bodyguard ostensibly means he’s a good guy who only saves lives, is shown to be a patsy in his capitalist acceptance of legal right and wrong.

I find this deeply troubling and a bit Trump-esque; we are the good guys so therefore laws shouldn’t get in the way of us eliminating all those we deem to be wrong. It is viscerally satisfying though. What stands out is that Kincaid and Bryce, and to a certain extent Hayek as encapsulated in the final scene, are surrounded by horrible violence and corruption but it has no power over them. There may be a nick or a scratch or a close call but they are immune to the storm that rages around them. Don’t we all wish we could live like that; safe, no matter how dark it gets?