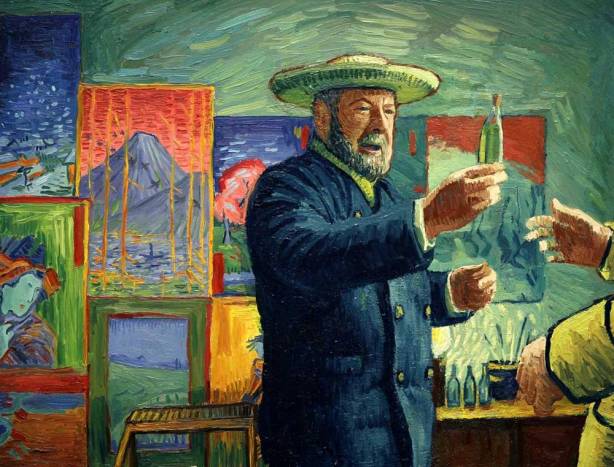 Like an episode of Midsomer Murders but painted, this misguided commodification of the art of Vincent Van Gogh is devoid of any real exploration of the artist or his art. Proudly stating upfront that each frame has been hand painted, the gimmick is at first intriguing but soon becomes a distraction. It can’t hide the insubstantial plot, dodgy accents and lack of drama.

Set one year after Vincent’s death, we follow a bloke in an interesting yellow jacket (Douglas Booth) who is the son of the postman who delivered Vincent’s mail (Chris O’Dowd). Or maybe Theo’s, Vincent’s brother. Anyway, he has a broad Irish accent, beggora, and looks a lot like Chris O’Dowd with a beard and a lot of paint on his face. The yellow jacket man travels to Auvers where Vincent lived his last years and died, to deliver a letter. He finds intrigue, conflicting stories about Vincent’s death and lots of Londoners. The local boatman (Aidan Turner) ‘has the ‘ump’ and ruffians call him a ‘nancy bird’, all authentic French slang in 1871 apparently.

Like a good British small country town murder mystery, doubt is cast on whether Vincent did actually suicide. There are confident but conflicting opinions, red herrings and cruel and ignorant townsfolk. What that isn’t is any great insight into Van Gogh or his work.

Painting each frame in Van Gogh’s impasto post-impressionist style must’ve seems like a good idea at the time. It works for a moment. With each frame, paint moves and speckles, following the motion of a person or the wind or camera. Some sections stay static, creating an odd juxtaposition that makes you acutely aware of the 2-D animation. Dots on a dress may move with the person or not and the effect is a constant distraction and an awareness of artifice.

Faces behave differently; where everything else is impasto, facial features stay well-defined so that we recognise Booth, O’Dowd, Saoirse Ronan, John Sessions and Helen McCrory. It is a mistake to think that using a painter’s style in the film is anything more than a gimmick. It crowds out the story and makes what was a singular vision into something akin to a Snapchat filter.

I walked out before the end so I never got to see if DI Tom Barnaby and his yellow jacket solved the mystery. I’m sure if he proved it was anything but a suicide, I would’ve seen it on Facebook by now.