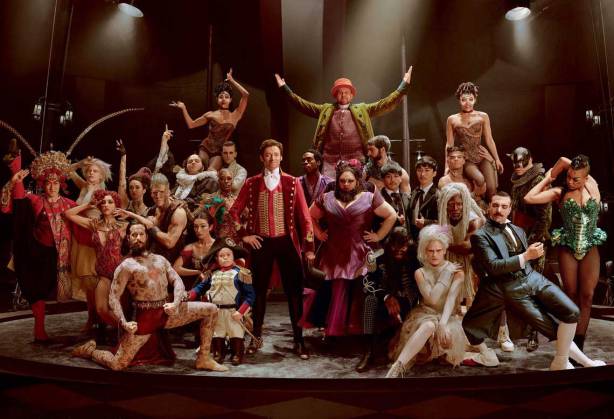 Image by Annie Liebovitz via http://www.vogue.com

If you want to see a film that makes you believe that all is right with the world, that discrimination, racism and the class system are problems that were resolved 100+ years ago with a bit of song and dance and hugging, then this is the film for you.

I went in to this film knowing nothing about it except that it starred Hugh Jackman and primed by several friends who had raved about it on social media. The first surprise came around ten minutes in when the characters began to sing – ah, it’s a muscial, let’s hope it’s a La La Land rather than a Dreamgirls kind of musical. The next surprise was that it is based on the life of PT Barnum, the ‘inventor’ of show-business and the art of the hustle (or the artful hustle).

Through swift montages and a few catchy songs, we see Phineas Taylor Barnum (Ellis Rubin) as the poor child of a tailor (Will Swenson), befriending wealthy Charity (Skylar Dunn). He ends up living on the streets after the death of his father but full of dreams of adventure. With a pirouette and some stardust, Barnum becomes a rather mature-looking for a 19 year old Hugh Jackman who marries a winsomely grown-up Charity (Michelle Williams). They dance and sing and have two equally winsome daughters, Caroline (Austyn Johnson) and Helen (Cameron Seely).

The story line is a grand arc. PT is poor but wants to give Charity an opulent life, even though she very clearly states it is not what she wants. He loses his job and, after spying a few people with physical abnormalities, borrows money to set up a museum of the strange and macabre. A chance comment from Caroline, or maybe Helen, prompts him to hire real life people who are ‘human oddities.’

Through this, we see a range of diverse characters; Lettie (Keala Settle) is bearded; Tom Thumb (Sam Humphrey) is short-statured; Anne (Zendaya) and WD (Yahya Abdul-Mateen II) are people of colour; Chang (Yusaku Komori) and Eng (Danial Son) are the conjoined twins about whom the term ‘Siamese twins’ was coined. There is a very tall man, a fat man, a ‘dog boy’ with hair all over his body, a tattooed man and various other characters who sing and dance in the background but have no real role.

I know this is a musical but I had a strong sense of it skating over the truth of the story to give us Barnum as an ‘everyman’ who is really ‘just like us’: ambitious and misguided but good-hearted and open to learning lessons about joy and the importance of family over career. Wrapped up in catchy and contemporary song and dance routines, it’s easy to ignore the lack of voice or story for any characters except Barnum and his business partner, not James Bailey but fictional toff Philip Carlyle (Zac Efron).

Barnum seems to represent newly republican America where anyone can make their fortune and, in doing so, change the world. Troublingly, he is the America of fake news and capitalism, contrasted cinematically with the stuffy, racist privilege of those with inherited wealth. Barnum and Carlyle learn lessons of acceptance, particularly of Anne who Carlyle, like Mr Darcy, has an infatuation for “against his better judgement.” Set at a time when slavery was still rife in the south, this seems an outrageous trivialisation of a profound and continuing problem.

It worries me that so many people love this movie. It mischaracterises Barnum as a lovable rogue. Let’s not forget that his first human exhibit was 80 year old blind, mostly paralyzed slave Joice Heth, who he ‘leased’ for a year, using a loophole in the law that banned slavery in New York. Exhibiting her as the 160 year old nurse of George Washington, on her death a few years later he staged a public autopsy to (unsuccessfully) disprove claims that her age was a hoax. Although a philanthropist and politician, Barnum in real life seems to have been largely driven by a desire for fame and profit.

There are some minor spoilers in the next paragraph so don’t read on if you want to see this movie.

The story line with Swedish opera singer Jenny Lind (Rebecca Ferguson) also doesn’t ring true. Barnum is drawn to her as she sings of her own ambitions for fame and she at first reluctantly embarks on a tour with him. This is shown as a huge ‘make or break’ gamble for him and we are left in no doubt that a romantic entanglement between the two is likely, if not an immediate reality. She then belies her characterisation as an artist driven primarily by philanthropy and a commitment to social justice by quitting the tour after Barnum, misguided family man that he is, spurns her advances, leaving him bankrupt.

In reality, the tour was a huge success with Barnum earning around US$14.5 million in today’s money and more than Lind did. She completed 92 shows with him then continued to tour on her own, uncomfortable with his focus on profit over people. How Lind is depicted does a disservice to her and limits her to the stereotype given to so many secondary female characters, that of fickle temptress.

Like La La Land, The Greatest Showman is full of catchy tunes, clever choreography and the sometimes anachronistic juxtaposition of musical eras. Like The Sound of Music, it turns a real-life horror into family-friendly entertainment. Like every other Hollywood movie, it pushes the stories of women, people of colour and people with diverse physicalities to the sidelines while we watch two white blokes sing and dance their way to just a little bit more inclusiveness. Bless.