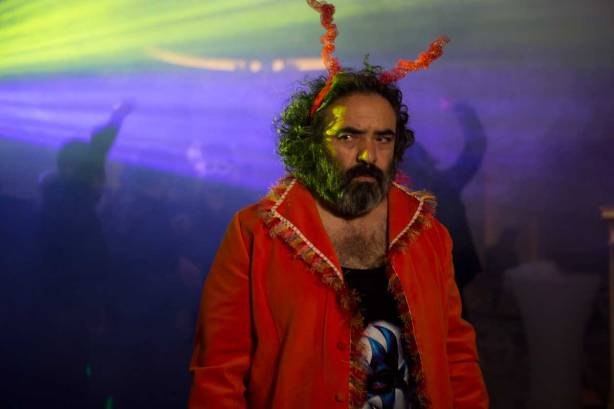 There seems to be a thing where Iranian directors make films about Iranian directors. Jafar Panahi likes to do it with his documentary-like musings starring himself, such as Tehran Taxi. Mani Haghighi takes a shot at it with Pig although his tongue is firmly lodged in his cheek.

Hasan (Hasan Majuni) is a celebrated director, irascible and petulant and frustrated by a two-year blacklisting that has stopped him making films. Even more aggravating is that an unknown killer has been targeting directors, leaving their decapitated heads with the word ‘pig’ carved in their foreheads. For Hasan, his continuing survival is tantamount to a bad review – he’s not talented enough to be a target.

And so goes a farcical story where Hasan grumbles and throws tantrums, his muse Shiva (Leila Hatami) tries to placate him and he resigns himself to making commercials for insect spray. There are some nice moments – the Robert Palmer-esque hallucination and Hasan’s many band T-shirts kept me entertained – but watching a grown man treat everyone around him badly palled after the first 20 minutes or so.

I stuck it out until the end, which I think I need a medal for, but it was worth it for the last 10 minutes. Funny, cathartic and appropriately flippant.