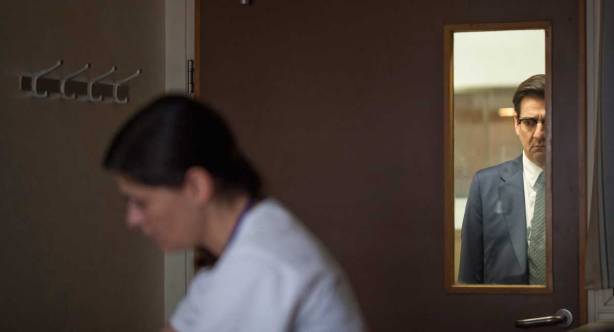 If you are a fan of the films of Yorgos Lanthimos (The Lobster, The Killing of a Sacred Deer), you’ll know what to expect from this structured and sobering feature from Babis Makridis. Co-written by Lanthimos collaborator Efthymis Filippou, it has a similar sensibility and intensity.

The Lawyer (Yannis Drakopoulos) lives in a bare and ordered house with his teenage son. His wife is in a coma and the Lawyer has found a sense of purpose and fulfilment in his role as an object of sympathy. A friendly neighbour bakes an orange cake each day and he hovers by the door, waiting for her knock, ensuring he adopts the right demeanour to evoke the most pity. He dirties his clothes so that he can visit the dry cleaner over and over again, eager for his sympathetic words.

The Lawyer becomes absorbed by his own sorrow and is drawn to stories of other people’s trauma. His disconnect from the emotions of others is clear and he seems gauche in his self-absorption. His obsession with being pitied is like an addiction; he needs more and more to reach the same catharsis and, for a narcissist, this means other people will suffer.

Filmed in a careful, quiet, visually structured style, the separation of the Lawyer from the chaos of human emotion is emphasised. It is horrific in its banality as we see the Lawyer become increasingly desperate. We are given some visual clues along the way, unnoticed but significant as the intensity ramps up and we see the Lawyer’s acts of resolution.

It is chilling, particularly in the final scenes, and it reminded me most of Dogtooth and Album, a Turkish film from MIFF 2016 that still haunts me. It’s not for everyone but if you like your cinema intense and uncompromising, give this one a go.