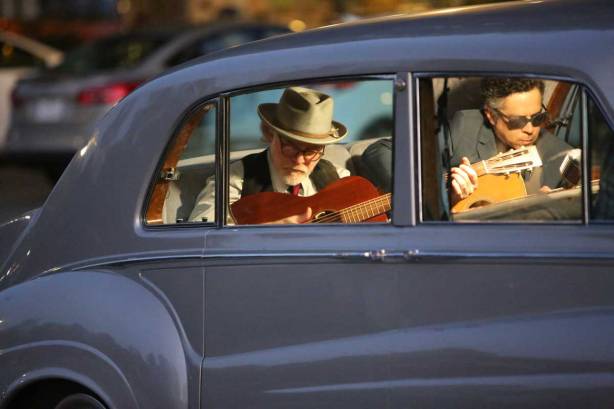 This masterful and emotionally-engaging documentary begins as a journey through the key places and moments in the life of Elvis Presley, from Tupelo to Memphis, Nashville, New York and finally Las Vegas. Filmmaker Eugene Jarecki drives around in Elvis’s Rolls-Royce and passengers join him, some telling stories of being Elvis’s friend, neighbour or fellow churchgoer, some famous faces talking about celebrity and politics, others just playing a tune.

The music reflects the places the car travels to, from americana and country to hip-hop and blues, and the connection is made to Elvis’s influences and also the reality that he was the white face chosen to make black music commercially successful. A memorable example of this is seeing Hounddog performed by Willie Mae ‘Big Mama’ Thornton, recorded and released before being made an even bigger hit four years later by Presley.

Jarecki begins to convincingly correlate the different phases of Elvis’s career with the gradual decline of culture, politics and community in the USA. Chuck D from Public Enemy talks of Elvis’s appropriation of black culture which was accepted but, for all his success, he never spoke out about civil rights. We see the career decisions based on making money rather than artistic integrity or interest, such as his many superficial and repetitive films. Elvis’s acceptance of being drafted and using the experience to further his career is contrasted with Mohammed Ali’s much more controversial stance. And from that experience, we see the beginnings of his escalating drug addiction.

There are some lovely moments, my favourite being Mike Myers, who I feel like I haven’t seen on screen for a long time. He talks about the USA from the point of view of a Canadian, saying that the USA and Canada are children of the same mother, Britain, but the US grew up to be a movie star and Canada decided to stay home and live with mother.

It is a story of someone so quintessentially ‘everyman’ American succumbing to greed and conformity, to a perversion of the American dream. Ashton Kutcher talks of celebrity outstripping talent from his own experience and how isolating this is. Overlaid with this is the progression of Donald Trump to President as the ultimate example. Somewhere someone says that addiction leaves a spiritual void and you can see how this was true for Elvis and how it seems to be manifesting in the US.

The film never loses sight of the heart of the story – the joy and tragedy of Elvis – and the final scene is intensely moving.