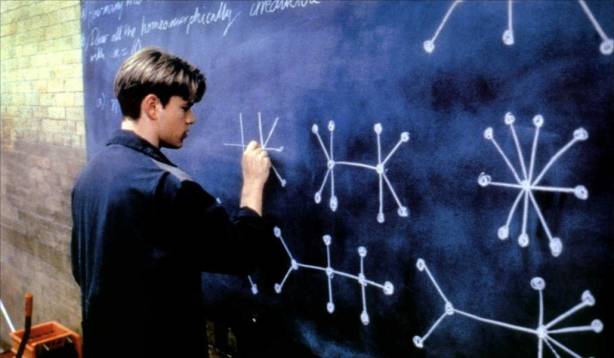 It’s a long time since I last watched this movie, which has stuck in my mind primarily due to the unexpected Oscar win of then unknown actors and screenwriters Matt Damon and Ben Affleck. I’d forgotten it was directed by Gus Van Sant, a director I admire for films like Elephant (2003), Mala Noche (1986) and My Own Private Idaho (1991). Sitting down to watch this again for the first time in perhaps 10 or 15 years, I found myself underwhelmed.

Damon and Affleck famously shopped the script around many studios, hiding an out-of-character sex scene between the two male lead characters in the middle of the script to test whether the people rejecting them had actually read it. Supposedly Harvey Weinstein was the only one to point it out and so this, plus his willingness to allow the unknown Damon to play the lead, saw them go with him.

Damon plays Will Hunting, a young man from ‘Southie’ or South Boston, a working class Irish-American area, who works as a janitor at the prestigious MIT and hangs out with friends Chuckie (Ben Affleck) and Morgan (Casey Affleck). MIT maths professor Lambeau (Stellan Skarsgård) posts a difficult maths problem on a hallway chalkboard and when it and a subsequent more difficult problem are solved, he discovers that the prodigy is Will.

From here the story is really about a clash of two social classes. Will has anger management issues and, despite his intellectual genius, is not all that smart. He feels a loyalty to his friends and the simple, macho, Irish lives they lead and resists Lambeau’s efforts to give him career prospects. A court-mandated requirement that he sees a psychologist sees Lambeau link him with old friend, Sean Maguire (Robin Williams). A romance is thrown into the mix when Will meets and impresses Skyler (Minnie Driver) in a bar. She is a pre-med student and, like Lambeau, represents higher social and financial aspirations.

Ben Affleck plays a minor but important character and made sure to give himself a couple of profound and ‘important’ moments, the last one noticeably overplayed. The musical score is really strange, showing restraint during emotional scenes but then overlaying cloyingly sentimental strings at seemingly inconsequential moments.

There are some good aspects of the film. Robin Williams is given the most interesting character and the best lines and I found myself much more engaged whenever he or Minnie Driver were on screen. Damon looks so young and handles the emotional range of his character well but somehow he and the other (pretty much) all male characters are leaden and uninspiring, all ego and bravado. It’s hard to ignore the lack of good female characters, particularly with the legacy of harassment and abuse that Weinstein and both Afflecks have been accused of. It seems a particularly white, male story masquerading as one about something more universal, oblivious to its privilege even as it romanticises the noble qualities of an underclass.

Overall, the message of the film seems predictable and shallow, something we have seen so many times. I wonder, though, if that’s because we have seen so many films influenced by its basic narrative of a young, white everyman who can have anything he wants if he just chooses it.