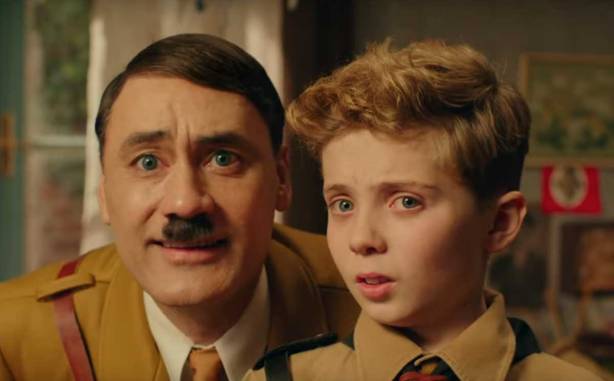 I’ll declare a bias upfront: I’m a Taika Waititi fan. From Boy (2010) and Eagle vs. Shark (2007) to What We Do in the Shadows (2014) and Hunt for the Wilderpeople (2016), his dry, droll, irreverent humour never fails to win me over. He even made a superhero movie watchable with Thor: Ragnarok (2017) mostly not taking itself too seriously.

When iconoclastic independent directors start to win awards and mainstream adulation, it can spell the end of what made them so great so it was with some trepidation that I ventured into Jojo Rabbit. It’s a delightful and precarious premise. Jojo (Roman Griffin Davis) is a 10-year-old boy living in an unspecified German town in the last month of World War II. He is a proud and determined member of the Hitler youth and has Hitler as an imaginary friend (played by Waititi). His best friend is Yorki (Archie Yates) and they are the misfits in the group – aiming for courage but unable to take on the cruelty required to be a Nazi.

Jojo’s mother Rosie (Scarlett Johansson) has a level head and no time for Nazi nonsense. When Jojo finds a Jewish girl, Elsa (Thomasin McKenzie), in the attic, he and imaginary Hitler struggle to reconcile her humanity with their ideology.

Making fun of the Holocaust is a dangerous thing and for someone who has not actually experienced it, it works. I still remember my Dutch-born University professor telling me he had no interest in seeing Oscar winner Life is Beautiful (1997) – when you’ve lived it, you have no desire to watch it. Jojo Rabbit works because it doesn’t pull its punches where it counts and the world of the film is a 10-year-old boy’s understanding of it. Even imaginary Hitler is really just Jojo and his transition from childish selfishness to social conscience.

There are moments of deep pathos that hit you unawares. The characters are broad but mostly given enough depth so that we care about them. Sam Rockwell and Alfie Allen are a great duo as a failed Nazis Captain Klenzendorf and Fenkel. Stephen Merchant channels the worst of public servants given power as Gestapo Deertz and Rebel Wilson does her usual shtick as Fräulein Rahm.

Griffin Davis is remarkable and carries his weighty role with aplomb. McKenzie, who I discovered is a Kiwi and was so excellent in Leave No Trace (2018), is convincing as Elsa and is allowed to be more than a victim of circumstance. Johansson’s part is small but she encapsulates a core theme Waititi describes as a love letter to his mother and single parents everywhere.

Waititi is delightful in every scene, playing Hitler as a spoiled and insolent child. There is catharsis in recognising his powerlessness, and knowing his demise and seeing Jojo’s humanity defeat him (minor spoiler). The final scene made me tear up and it is underscored by a quote from Rainer Maria Rilke that I’m tempted to get as a tattoo:

Let everything happen to you.
Beauty and terror.
Just keep going.
No feeling is final.