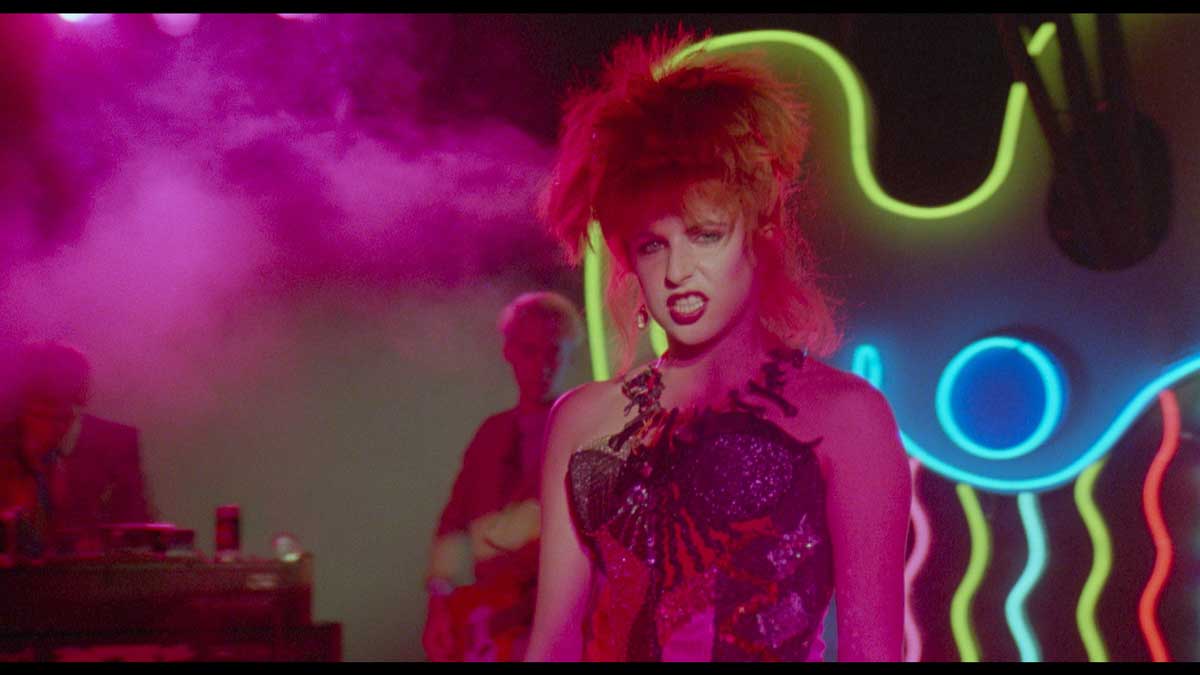 “He’s got body, he’s got soul, I’m torn apart without him…” I knew every word of every song and I was itching to get up and dance during the Pioneering Women screening of this delightful and very Australian musical.

Made in 1982 (when I was 17 and in my last year of high school), Gillian Armstrong fought hard to direct this contemporary musical after being typecast for her period pieces. Set in a delightfully retro pub under the Sydney Harbour Bridge (the pub’s still there but the inside was a set), this musical follows the rise to recognition of singer Jackie Mullens (Jo Kennedy) and her 14-year-old manager cousin Angus (Ross O’Donovan).

Jackie and Angus live in the pub run by Jackie’s socially ambitious mother Pearl (Margo Lee) and her psychic Nana (Pat Evison). Jackie blurs the line between fashion and performance art in her appearance, with her predilection for novelty outfits, tutus and big hair, and will do anything for the chance to be a famous singer. Angus is the kind of fearless, pushy and winsome advocate any budding singer needs. He gets Jackie a spot at at the Lizard Lounge where she draws the attention of dreamy Robbie (Ned Lander) and acquires a backing band. Stardom is not all it seems though and Jackie is confronted by that favoured trope of musicals, the choice between fame and artistic integrity.

The story is chock full of gorgeous characters, especially the pub regulars. I kept spotting well known faces in small parts; keep an eye out for Lucky Grills, Donnie Sutherland, Geoffrey Rush, a fresh-faced Mark Little (Joe Mangel from Neighbours) and Kaaren Fairfax. The musical numbers are delightfully over the top and of the type where everyone joins in the choreographed dancing. This would make such a great audience participation movie.

Many of the songs hold up, which is not surprising considering most were written by Tim Finn. Happily, the soundtrack is about to get a re-release. Kennedy’s “Body and Soul” and O’Donovan’s “I Want to Live in a House” stand out, with the wonderful choreography for this last one (by David Atkins) an homage to Help and A Hard Day’s Night.

Jo Kennedy is a standout with her Siouxsie Sioux voice and Cindy Lauper fashion sense. According to Armstrong, Kennedy was a singer in a punk band at the time, the shouty kind, and thought the clothes and music of the film rather embarrassing. Ross O’Donovan walks the right side of the line between endearing and irritating and has great chemistry with Kennedy.

I’m so glad to have been given the opportunity to see this film again, aided by the National Film and Sound Archive (NFSA) Restores program that is working to digitise, restore and protect classic and cult Australian films (including Shame). I’d forgotten how much I loved it and it’s now firmly back in my top ten musicals.